Martin Lachmann: the fate of an Allianz employee you should know

Martin Lachmann was dynamic, successful, self-confident, and loyal to the very end – and he was Jewish. He lived and worked for Allianz over many years until his work and life were destroyed in Nazi Germany by anti-Semitism and his fellow citizens. His grandson, Peter Haas, told Allianz his thoughts about his grandfather. 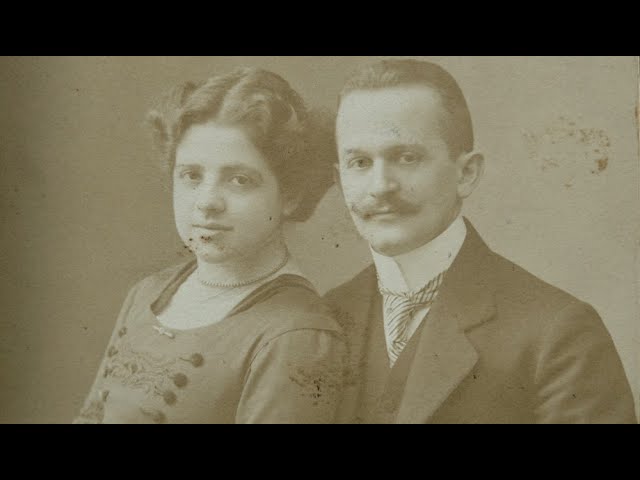 Full-sized video at the bottom of this article.

Peter Haas has only very vague memories. After all, he was just four years old when he last saw his grandfather, Martin Lachmann. He remembers his generosity, his presents, and being taken to the theater. He knows what happened later only from letters his grandfather wrote and the little that his family told him.

On October 22, 1941, Martin Lachmann wrote to his daughter Ruth and his son-in-law Leopold Haas, who were living in exile in Sweden. It was his last letter. On November 14, 1941, a train departed the Berlin-Grunewald station, deporting him and more than 1,000 other victims of persecution.

Who was Martin Lachmann

Martin Lachmann was born in 1881 and started working for an insurance company in 1907. He served as a soldier in the German Army in World War I and married Aenne Alsberg (1885-1942), who descended from a family of mall entrepreneurs in Rhineland. In 1911, their daughter Ruth was born, the mother of Peter Haas.

At Allianz, Martin Lachmann developed his career as an insurance salesman and administered the flourishing agency "Subdirektion Lachmann" in Berlin-Charlottenburg. From its establishment in 1929, through 1937, he was a member of the so-called "Club of Millions" consisting of the most successful insurance agents.

Unlike most Jewish Germans, Martin Lachmann initially managed to keep his position and his earnings even after 1933.

Bottom: Martin Lachmann (left) with his grandson Peter Haas in 1938.

Gradually, however, his world became more and more threatened. Finally in 1938, he could no longer suppress the idea of emigration. Hans Heß, CEO of Allianz, was called in to pave a way for Lachmann to a position in Switzerland. But Lachmann’s wariness grew. On 20th October 1938 about three weeks before the “Crystal Night”, he wrote to his daughter Ruth and her husband in Stockholm:

“My future is now completely unclear. I don’t believe of course that Allianz will let me down, since that would be the worst possible thing.”

His fear proved all too justified. Just a few days later, in a personal conversation, Hans Heß explained to him that Allianz would have to cancel his labor contract at the end of the year 1938.

Still, he hoped for employment in Switzerland. But shortly afterwards the next shock followed: Allianz’s legal adviser Hans Goudefroy and Hans Heß explained to their longstanding employee that he would only receive a third of the contractually agreed yearly support. The political circumstances would not allow to pay a Jewish retiree a retirement income of this amount.

Martin Lachmann. Photo undated.
Martin Lachmann’s grandson Peter Haas in his study (2002)
This is a terribly difficult time that we are enduring here, but hopefully everything will turn out alright.

Soon the Nazi authorities forced Martin Lachmann to leave his house. He had to reduce his expenses and hoped for a better life in Switzerland. But local authorities hesitated for too long, so that in the following years he pursued various other options for emigration, supported by his family in Sweden. But over the course of time, all potential possibilities shattered.

In October 1941, the deportations from Berlin started. On November 14, the train deporting Martin Lachmann and more than 1,000 other persecutees to Minsk, departed from Berlin-Grunewald Station. Martin Lachmann died on the journey. He never saw his beloved grandchild again.

What are the lessons of Martin Lachmann's tragic story?

In 1997, Allianz started to have its history of the Nazi era researched by the historian Gerald D. Feldman. It was late, Peter Haas says, but at least it happened. Allianz was facing up to its past. Peter Haas was very open. He told Allianz what he knew about his grandparents; what he found out over many years of research about the fate of his family. He leafed through old photos and explained how history had become the theme of his life.

In an interview with him in July 2021, for the film we are presenting here, he explains how his mother, Martin Lachmann’s daughter Ruth, tried to come to terms with her fate as an immigrant and the killing of her father and many members of her family.

Looking back, Peter Haas tells us today how his view developed: “But eventually, when studying history, more and more, I learned a lot about Germany. Not all Germans were Nazis.” And with reference to Allianz, the company his grandfather had devoted the best years of his life, he adds: “Allianz during the Nazi-era is not a positive record” but “I could say also with what Allianz has done in connection with me, giving me information and asking me to help them with their history gives me quite another view of Allianz today.”

Asked if there is anything, he thinks that we at Allianz and our society in general can learn from this. He concludes; “So what we can learn is really, not another time Nazism, anywhere. It is a difficult thing to fight populism and racism. I have no good solution except: knowledge, information.”

So what we can learn is really, not another time Nazism, anywhere. It is a difficult thing to fight populism and racism. I have no good solution except: knowledge, information.

A new stadium, exciting cultural and sports events with high-profile stars and important steps towards sustainability. Click through the photos and read about the highlights of the Allianz year 2013. Further important news will be added within the remaining weeks of the year.

The Allianz year 2012 in keywords

The "9-year itch" proved to be a real test for the euro – from the debt crisis to debates about the disintegration of the eurozone. When the bells chime in 2012, the euro banknotes and coins will be celebrating their 10th birthday, although it would appear that virtually nobody is in the mood for a party.