Analyzing 70 pension systems in terms of sustainability and adequacy, only a handful of countries have already made their pension system demography-proof, above all Sweden, Belgium, and Denmark.

The Allianz Global Pension Report takes the pulse of pension systems around the world with our proprietary pension indicator, the Allianz Pension Index (API). The index follows a simple logic: It starts the analysis with the demographic and fiscal prerequisites and then continues to examine pension systems along their two decisive dimensions: sustainability and adequacy. Hence, it is based on three sub-indices and takes all in all 30 parameters into account, which are rated on a scale of 1 to 7, with 1 being the best grade. By adding up all weighted subtotals, the API assigns each of the analyzed 70 countries a grade between 1 and 7, thus providing a comprehensive view of the respective pension system.

The dramatic shift in demographics is best characterized by the increase in the global old-age dependency ratio: until 2050, it will grow by a whopping 77% to 25%, i.e., faster than in the last 70 years since 1950. In many emerging economies the ratio is going to more than double within the next three decades, that is, in less than half of the time this development took in Europe and Northern America. The most prominent example is China where the ratio is going to increase from 17% to 44%. For industrialized countries, however, the absolute level of this ratio is the main reason for concern, reaching, for example, 51% in Western Europe. 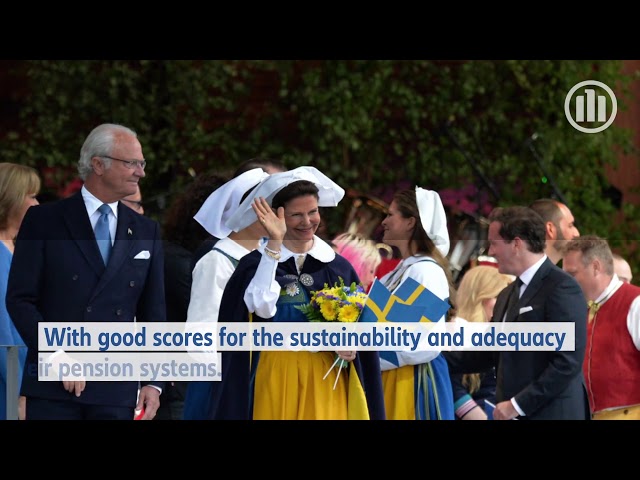 This development is reflected in the first sub-index of the API, called the starting points, which combines demographic change and the public financial situation (financial leeway). Not surprisingly, many emerging countries in Africa or Asia score rather well as the population is still young and public deficits and debts are rather low. On the other hand, many European countries such as Italy or Portugal are among the worst performers: old populations meet high debts.

The second sub-index of the API is sustainability, measuring how systems react to demo-graphic change: Are there built-in stabilizers or will the system be blown apart when the number of contributors falls while that of beneficiaries keeps rising? In that context, an important lever is the retirement age. In the 1950s, an average 65-year old men, living in Northern America or Europe could expect to spend around 12.5 years in retirement. Today, the aver-age further life expectancy of a 65-year old is 17.6 years and it is set to increase to 20.8 years in 2050. As a consequence, the ratio of working life to time spent in retirement has declined markedly. Countries, which decided to adjust the legal retirement age or the increase of pension benefits to the development of further life expectancy like the Netherlands, have thus a more sustainable pension system than countries where postponing retirement further is still a taboo.

The third sub-index of the API rates the adequacy of pension system, questioning whether pension systems provide an adequate standard of living in old age. Important levers are the coverage ratio – i.e. how big are the shares of the working age population and the age group in retirement age that are covered by the pension system? –, the benefit ratio – i.e. how much money (measured in terms of average income) does an average pensioner receive? –, and last but not least the existence of capital-funded old-age provision and other sources of in-come. Overall, the average score in the adequacy sub-index (3.7) is slightly better than that in the sustainability sub-index (4.0), a sign that most systems still put greater weight on the well-being of the current generation of pensioners than on that of the future generation of tax and social contribution payers. The countries leading the adequacy ranking have either still rather generous state pensions, like Austria or Italy, or strong capital-funded second and third pillars, like New Zealand or the Netherlands.

Combining the scores of all three sub-indices of the API gives the overall results: Sweden, Belgium, and Denmark come out as the relatively best pension systems worldwide.