Allianz Group achieved outstanding results in revenues, operating profit and net income in 2019 despite a further decline in interest rates. Internal revenue growth, which adjusts for currency and consolidation effects, amounted to 5.9 percent, driven by all business segments. Total revenues increased by 7.6 percent to 142.4 (2018: 132.3) billion euros. Operating profit grew 3.0 percent to 11.9 (11.5) billion euros and is in the upper half of the Group’s announced target range of 11.0 to 12.0 billion euros. Operating profit growth was mostly driven by our Life/Health business segment due to a higher investment margin, a positive one-off profit in the United States, and volume growth. Our Asset Management business segment also reported a strong increase in operating profit due to higher average third-party assets under management (AuM) and positive foreign currency translation effects. Our Property-Casualty business segment was negatively impacted by lower run-off, due to a strengthening of reserves at AGCS, and lower operating investment income. This was partly compensated by the improved expense ratio. Net income attributable to shareholders grew 6.1 percent to 7.9 (7.5) billion euros mostly due to the increased operating profit and improved non-operating result, as well as a lower tax rate.

70 percent of businesses worldwide achieved a Net Promoter Score (NPS) above market average compared to 74 percent in the previous year. The Inclusive Meritocracy Index (IMIX), which measures leadership and performance culture, was at an all-time high of 73 percent in 2019.

”2019 was another successful year with record results for the Allianz Group. This reflects the trust of customers and shareholders and the engagement of our excellent people. Allianz continued to make important strategic strides in 2019 like our acquisitions in the UK and Brazil and being awarded the first fully foreign-owned insurance holding in China. We also contribute to society: As one of the initiators of the newly launched UN-convened Asset Owner Alliance we committed to transition our own investment portfolios to net-zero by 2050,” said Oliver Bäte, Chief Executive Officer of Allianz SE.

“Allianz had a successful financial year 2019, with operating profit of 11.9 billion euros in the upper half of the Group’s announced operating profit target range,” said Giulio Terzariol, Chief Financial Officer of Allianz SE. “Active risk management led to a strong Solvency II capitalization ratio of 212 percent, showing the Group’s resilience in today’s negative interest rate environment and providing a safe haven to our customers and shareholders. We look to generate 12 billion euros in operating profit in 2020, plus or minus 500 million euros – barring unforeseen events, crises or natural catastrophes.”

“Our Property-Casualty business segment performed below expectations in 2019, following a disappointing reserve strengthening at AGCS that overcompensated for a solid accident year, underwriting and productivity gains,” said Giulio Terzariol. ”Most of our operations have been performing very well. We remain committed to our goal of improving the combined ratio to 93 percent by the end of 2021.”

In the fourth quarter of 2019, total revenues increased to 13.1 (12.1) billion euros. Adjusted for foreign currency translation and consolidation effects, internal growth amounted to 5.6 percent, with price and volume effects contributing 2.9 percent and 2.8 percent respectively. Operating profit decreased by 42.3 percent to 861 million euros compared to 2018 due to a lower underwriting result, mainly driven by the aforementioned reserve strengthening at AGCS. The combined ratio for the fourth quarter of 2019 worsened by 5.5 percentage points to 99.6 percent.

“While the interest rate environment remained challenging, we managed to increase our value of new business by 3.8 percent in 2019. I am optimistic about our business prospects. We continue to take management actions and adapt our product offering for the benefit of our stakeholders as shown by the strong operating profit,” said Giulio Terzariol.

In the fourth quarter of 2019, PVNBP grew to 18.1 (16.1) billion euros due to the sales growth in our capital-efficient products in the German life business. Operating profit increased to 1.3 (1.0) billion euros predominantly due to an improved investment margin in France and in the United States. NBM dropped to 2.9 (3.9) percent, causing the VNB to decrease to 519 (631) million euros.

Asset Management: Third-party assets under management at an all-time high at the end of 2019

In the fourth quarter of 2019, operating profit increased by 18.5 percent to 750 million euros, mostly due to higher AuM-driven revenues and performance fees. The cost-income ratio went down by 1.0 percentage points to 62.7 percent. Third-party AuM increased by 5 billion euros: third-party net inflows of 19.7 billion euros and positive market effects of 17.2 billion euros were burdened by negative effects from foreign currency translation of 32.1 billion euros. 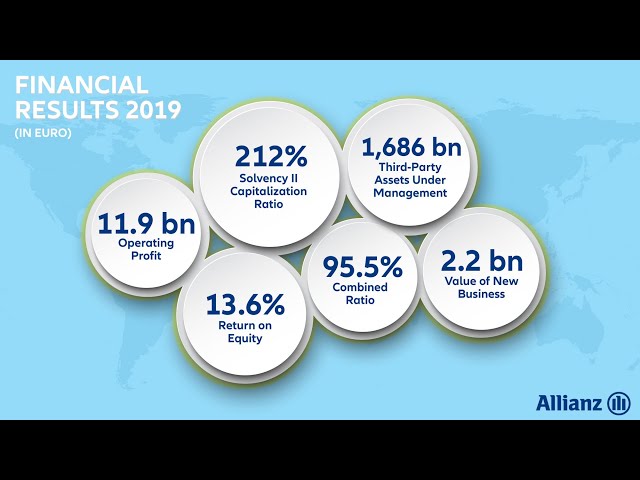 No duty to update

The Allianz Group assumes no obligation to update any information or forward-looking statement contained herein, save for any information we are required to disclose by law.

The figures regarding the net assets, financial position and results of operations have been prepared in conformity with International Financial Reporting Standards. Information is based on preliminary figures. Final results for fiscal year 2019 will be released on March 6, 2020 (publication of the Annual Report).

This is a translation of the German Quarterly and Full-Year Earnings Release of the Allianz Group. In case of any divergences, the German original is binding.

The Group confirms the full-year outlook.

With the publication of its second quarter and half-year 2022 financial results today, Allianz Group confirmed its full-year outlook.

Allianz Global Investors (“AllianzGI”) announced today that it had entered into a memorandum of understanding (“MOU”) with Voya Financial relating to a strategic partnership whereby AllianzGI would transfer selected investment teams and assets comprising most of its US business (“AGI US”) to Voya Investment Management (“Voya IM”) in return for an up to 24% equity stake in the enlarged asset manager.