With COVID-19, inflation, energy crisis, food crisis, soaring prices, supply chain shocks, the war in Ukraine, and climate crisis, to name a few, it’s hard to see the glass as half-full. When thinking about the future and the current economic situation, the majority of respondents from Germany, Italy, and France in Allianz Research’s newly published Allianz Pulse 2022 survey seem to be united in their pessimism.

Europe’s bumper sticker currently reads if you expect the worst, you'll never be disappointed. With COVID-19, inflation, energy crisis, food crisis, soaring prices, supply chain shocks, the war in Ukraine, and climate crisis, to name a few, it’s hard to see the glass as half-full. When thinking about the future and the current economic situation, the majority of respondents from Germany, Italy, and France in Allianz Research’s newly published Allianz Pulse 2022 survey* seem to be united in their pessimism.

According to the report, in France and Italy the mood has improved only ever so slightly since for every participant who assesses the situation as good, there are almost three who assess it as bad. German participants were the only ones who were somewhat satisfied with the economic conditions in 2019 and 2021, but pessimists now clearly outnumber optimists in Germany as well.

For the participants in this year’s public opinion survey, the dominant pessimistic streak is not fueled mainly by the horrors of the war in Ukraine. For most respondents, the topic of geopolitics plays a minor role. Whether or not such a view is a result of fatigue is hard to say. For 57 percent of German respondents, however, inflation remains the top issue. The majority of Italians are concerned about jobs (72%), while French respondents are still reeling from the shock of COVID-19 (62%). 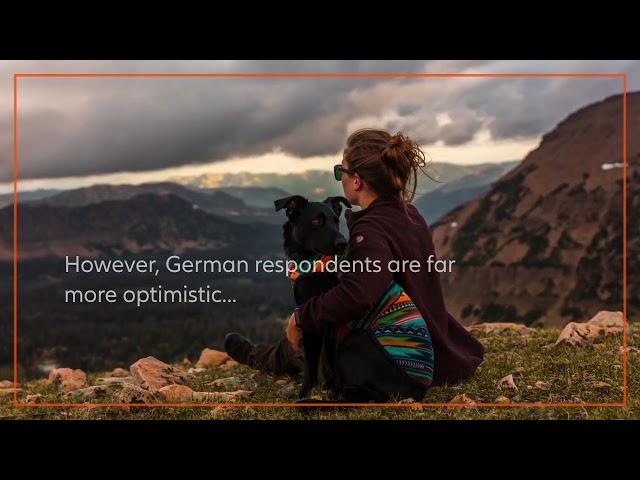 The worry on the minds of 57 percent of German respondents—inflation—is a battlefield where both the monetary policy and governments act with hopes of subsiding it, whether through direct intervention in the market or (temporary) tax cuts.

Among respondents, there is a broad consensus that governments should take action in the form of price controls and tax cuts.

However, when personal action comes into play, especially with regard to their own savings, around 50 percent of respondents choose passivity, meaning, they made no changes to their financial assets portfolio structure.

In the sea of problems that COVID-19 created, soaring debt remains persistently high, now adding up to almost 100 percent of GDP in the euro area. Among respondents, different age cohorts view the problem of debt quite differently.

While the majority of younger respondents are in favor of a consistent debt reduction (35% in Gen-Z), this percentage drops to about half in the boomer generation (18%). In contrast, the opposite is true of attitudes toward the mutualization of debt: older respondents, in particular, are in favor of this step (35%), while members of Gen-Z are significantly more skeptical (23%); the other generations fall in between. If not handled properly, the problem of debt could increase intergenerational inequality.

EU: united in solidarity, divided by the euro

Whether or not the world reached another greater (or lesser) geopolitical turning point depends on how the war in Ukraine plays itself out. Will the EU unite in solidarity or will crisis act as a dividing force? The majority of respondents in all three countries expect the war in Ukraine to increase solidarity among EU members.

Though inequality and growth continue to be of central importance for the participants, the strengthening of military capabilities is now also high on the list, at least for the French and German respondents.

The beginning of the end of (hyper)globalization

What COVID-19 slowed down, the war in Ukraine might bring to an end—the era of hyper-globalization. We are witnessing a shift in focus from efficiency and speed to promoting the resilience of supply chains, from purely economic thinking to geopolitical thinking.

All respondents, however, express a high level of agreement when it comes to trade restrictions. According to their opinions, trade should mainly focus on the narrow circle of partner states that share common interests and values.

Will decarbonization have to wait?

The war in Ukraine has clearly demonstrated Europe’s dependency on Russian gas and oil. In the midst of tumultuous energy-insecure months ahead, will the decarbonization of economy have to wait?

In a glimmer of hope, the large majority of respondents—39 percent in France, 46 percent in Germany, and 47 percent in Italy—is not willing to sacrifice decarbonization.

When it comes to their own actions, French and Germans focus primarily on food and mobility as ways of fighting emissions personally. The Italian respondents, on the other hand, shifted their personal action to buying an electric car and retrofitting their homes.

With COVID-19, inflation, energy crisis, food crisis, soaring prices, supply chain shocks, the war in Ukraine, and climate crisis, to name a few, it’s hard to see the glass as half-full. When thinking about the future and the current economic situation, the majority of respondents from Germany, Italy, and France in Allianz Research’s newly published Allianz Pulse 2022 survey seem to be united in their pessimism.

The analysis conducted by Allianz Global Corporate & Specialty found that over the past five years, fire and explosion, natural catastrophes and faulty workmanship or maintenance have been the major causes of loss by value of insurance claims.

The spring of discontent: global food crisis and the potential for civil unrests

The invasion of Ukraine in February 2022 has triggered a global food crisis with far-reaching consequences, according to the recently published report from Allianz Research. Without the millions of tons of agricultural produce flowing through Ukrainian ports, millions are at risk of food insecurity.