Results
The results and related documents can be found in the download center.

Our excellent results this quarter again prove the resilience and strength of Allianz amid a dramatic geopolitical and market environment. Buoyed by outperformance in our Property-Casualty business, our operating profit and net income demonstrate to our stakeholders the benefits of our global scale and diversification, as well as our customer-centric strategy. Further, our capital management capabilities and balance sheet create valuable optionality for Allianz, allowing us to confidently confront a changing economic landscape.
Oliver Bäte
Chief Executive Officer, Allianz SE

3Q 2022: Total revenues increased 1.3 percent to 34.8 (3Q 2021: 34.4) billion euros, driven by the Property-Casualty business segment, with positive price effect and volume growth. This was partially offset by the Life/Health business segment, primarily due to softer sales in Italy and Germany. The Asset Management business segment was slightly down as a result of lower assets under management (AuM)-driven revenues and performance fees.

Internal revenue growth, which adjusts for foreign currency translation and consolidation effects, was minus 3.7 percent.

9M 2022: Total revenues increased 5.3 percent to 116.0 (9M 2021: 110.1) billion euros, largely driven by the Property-Casualty business segment due to positive price and volume effects. This was supported further by the Asset Management business segment as a result of higher AuM-driven revenues, while the Life/Health business segment remained stable.

3Q 2022: Operating profit increased 7.4 percent to 3.5 (3.2) billion euros, driven by improved investment and underwriting results in the Property-Casualty segment. This was partially offset by the Life/Health business segment, impacted by variable-annuity products in the United States as well as a softer net harvesting result in Germany. Operating profit from the Asset Management business segment was also impacted by market developments.

Net income attributable to shareholders grew to a notable 2.5 (2.1) billion euros, as a result of operating profit growth and higher realized gains, primarily driven by the Voya transaction.

On November 9, 2022, Allianz has announced a new share buy-back program of up to 1 billion euros. The program shall start mid-November 2022 and be finalized by December 31, 2023, at the latest.

Net income attributable to shareholders was 4.7 (6.9) billion euros, reflecting the provision booked in the first quarter in relation to the AllianzGI U.S. Structured Alpha proceedings and a lower non-operating investment result.

"Our strong set of results highlight the underlying operational strength of Allianz’s business model, which has the ability to deliver sustainable value even in a rapidly-evolving economic and geopolitical environment.

Allianz’s resilient earnings power bodes well for our long-term growth trajectory. We expect our full-year operating profit to reach the upper half of the target range of 13.4 billion euros, plus or minus 1 billion euros.” 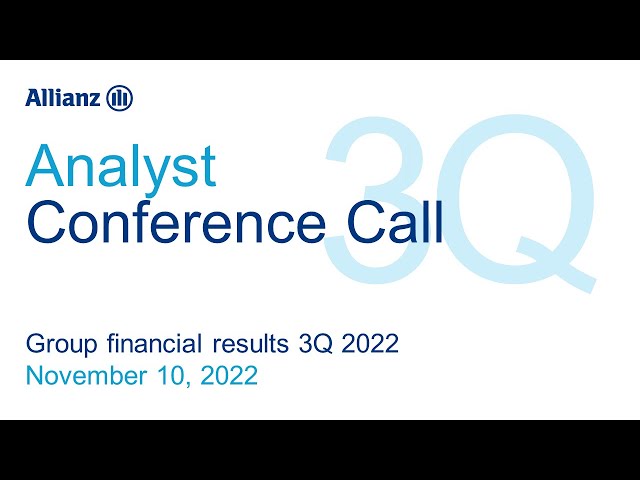 3Q 2022: Total revenues jumped 14.2 percent to 16.1 (14.1) billion euros. Adjusted for foreign currency translation and consolidation effects, the internal growth was 8.8 percent due to a strong price effect of 6.7 percent, a volume effect of 1.7 percent and a service effect of 0.4 percent.

Operating profit surged 32.0 percent to 1.7 (1.3) billion euros, due to strong growth in the operating investment result, driven by inflation-linked bonds and higher interest rates. A further rise in the underwriting result, mainly due to growth in premiums, lower claims from natural catastrophes and a favorable contribution from the run-off result, also contributed to growth. These developments more than offset higher attritional losses, largely due to higher claims inflation as well as higher large and weather-related losses.

9M 2022: Total revenues jumped 12.7 percent to 53.8 (47.7) billion euros. Adjusted for foreign currency translation and consolidation effects, internal growth was strong at 8.8 percent, supported by a price effect of 5.3 percent, a volume effect of 2.9 percent and a service effect of 0.6 percent.

The combined ratio was 94.1 percent (93.9 percent) as the impact of higher attritional losses related to claims inflation as well as higher weather-related losses was partially offset by a favorable run-off result. The expense ratio rose slightly to 26.8 percent (26.7 percent) due to higher acquisition costs.

3Q 2022: PVNBP3, the present value of new business premiums, was 13.7 (19.7) billion euros, mainly due to the absence of a one-off reinsurance treaty worth 3.7 billion euros at Allianz Reinsurance in the prior year. Softer sales of unit-linked products in Italy and single premium business in Germany also had an impact.

Operating profit was 1.0 (1.3) billion euros, as the impact of traditional and non-traditional variable-annuity products in the United States as well as lower net harvesting results in Germany more than offset the positive contribution from the acquired Aviva operations in Poland.

The new business margin (NBM) jumped to 4.0 percent (3.4 percent), driven by an improved business mix, particularly in Germany, and positive changes in our fixed index annuities business in the United States. Higher interest rates also contributed to the margin expansion. The value of new business (VNB) was 550 (665) million euros, reflecting the impact of a large reinsurance treaty at Allianz Reinsurance in the prior year.

9M 2022: PVNBP was 49.6 (58.9) billion euros, reflecting the impact of two events – a group contract renegotiation in Italy and a one-off reinsurance treaty at Allianz Reinsurance – in the prior year as well as lower single premium business in Germany.

Operating profit was 3.4 (3.7) billion euros, mainly due to the reasons mentioned above.

1 Excluding the application of transitional measures for technical provisions.

2 Natural catastrophes and adverse developments in the capital markets, as well as factors stated in our cautionary note regarding forward-looking statements may severely affect the operating profit and/or net income of our operations and the results of the Allianz Group.

3 PVNBP is shown after non-controlling interests, unless otherwise stated.

More information can be found in the financial calendar.

The Group confirms the full-year outlook.

With the publication of its second quarter and half-year 2022 financial results today, Allianz Group confirmed its full-year outlook.

Allianz Global Investors (“AllianzGI”) announced today that it had entered into a memorandum of understanding (“MOU”) with Voya Financial relating to a strategic partnership whereby AllianzGI would transfer selected investment teams and assets comprising most of its US business (“AGI US”) to Voya Investment Management (“Voya IM”) in return for an up to 24% equity stake in the enlarged asset manager.