The flash flood caused by low-pressure weather system Bernd devastated parts of Germany, Belgium and the Netherlands. Three months after the disaster, the infrastructure in the flooded areas remains in shambles and people are struggling to cope with the aftermath. Unfortunately, this flood is just one in a series of natural disasters this year, highlighting the need to actively address climate change and find new ways to protect citizens.

Low-pressure weather system Bernd caused heavy rainfall in eastern Belgium and western Germany between July 13 and 18. Over a period of 24 hours, these areas got as much rain as they usually do in a month. More than 220 people died.

The images of the catastrophe caused by the heavy rain are still fresh in people’s minds: streams turned into raging rivers, sweeping away cars and even houses. Roads, bridges and other essential infrastructure were destroyed. The persistent rain triggered massive landslides, one so severe that even part of the historic castle in Erftstadt near Cologne was swept away. According to estimates, a total of around 25,000 claims were submitted to Allianz. 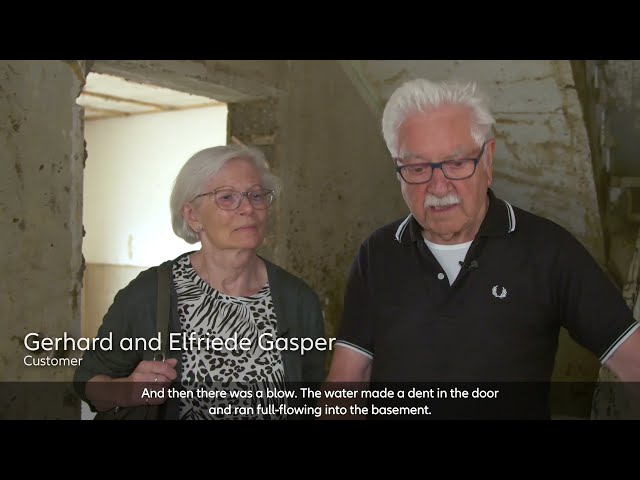 The persistent rain triggered massive landslides, one so severe that even part of the historic castle in Erftstadt near Cologne was swept away.

"Low-pressure system Bernd caused more severe damage to houses, companies and cars than we had originally estimated,” says Jochen Haug, member of the Allianz Versicherungs-AG Board of Management responsible for claims. For example, significantly more houses were completely damaged than in comparable natural catastrophes. The same applied to insured vehicles. “It was important for us to help our customers as quickly as possible in this extreme situation. Within the first four weeks, we paid out 112 million euros to our customers,” says Haug.

In Germany, around 300 Allianz claims experts and external service providers commissioned by the company were on site to assess the damage. They were supported by around 1,100 Allianz employees, who recorded claims and arranged payments to customers and restoration companies. “In addition, we have already transported around 100 emergency generators and 1,000 drying devices to the affected areas for our customers and commissioned around 250 drying companies.”

Advances of up to 10,000 euros were paid out to customers in the event of damage to buildings or household contents in a simplified process, even when claims were reported through telephone calls. “We wanted to enable them to keep going. Most of them could not salvage any of their belongings and had to buy even the most basic things again. Everything was gone, from toothbrushes to clothes,” says Haug.

How do you settle a claim when a house has been completely washed away and you have nothing at all to show as a customer? “For buildings, we used official documents such as the cadastral plan or the land register for proof, as well as photos from Google Maps. For household goods, credible photos were enough for us to assess the damage and make payments,” he explains.

Haug personally got a picture of the on-ground situation in Eschweiler: “Even nine weeks after the flood, the struggle was far from over. Clients have reported that children in particular are still traumatized. Some start crying in school when it rains outside.” Many Eschweiler residents have been living in vacation homes or with relatives since the disaster. It will take time for them to move back into their own houses and apartments. Some customers do not want to return to their homes as the experience was too traumatic for them. “The claims settlement will keep us busy for some years to come, because real reconstruction can take place only after the basic infrastructure has been rebuilt,” Haug says.

Advances of up to 10,000 euros were paid out to customers in the event of damage to buildings or household contents in a simplified process, even when claims were reported through telephone calls.
Flooded production lines, damaged goods in supermarkets, destroyed public infrastructure for transport and telecommunication: Besides private households many smaller and larger companies suffered property damage and business interruption losses. Most of our customers are not or partly in operation. Full operation takes many months.

Events like the flood in July will likely occur more frequently as a result of climate change. Katherine Wenigmann, natural catastrophe (NatCat) risk expert at Allianz Re, believes that the situation will continue to worsen. “We know that a warmer atmosphere can hold more water vapor and that heavy precipitation events will occur more frequently,” she says. With each degree Celsius of warming, the atmosphere can hold about 7 percent more moisture, which can result in an increase in rainfall rates. “According to the latest research, climate change can cause some low-pressure systems to stall and stay over a region, resulting in large amounts of precipitation over a relatively short period of time,” she explains.

As was the case with the heavy rain caused by weather system Bernd. “Victims of flash floods caused due to heavy rains on streams often have higher flood losses than customers who live on major rivers. One reason is that flash floods come as such a surprise. It's also difficult to predict exactly where such a flash flood will occur,” she says. “Analysis of historical events shows that about 50 percent of flood claims occur outside of a mapped river floodplain.” This is true for both private and industrial customers. Allianz Global Corporate & Specialty (AGCS), the group’s industrial insurer, has also observed losses outside mapped river floodplains. These losses are often higher. Thomas Heintz, property risk consultant at AGCS, recommends that companies prepare for such natural events with a flood contingency plan or a business continuity plan to reduce potential losses. “Current events show how important it is to think about business continuity too,” he adds.

Businesses are generally better insured against natural hazards than private households - in Germany, for example, only around 46 percent of households are insured against floods and heavy rain. “Traditional property insurance for businesses usually includes protection against natural hazards,” explains Jürgen Wiemann, Regional Head of Property at AGCS in Germany. “As an insurer, we have to expect an increasing exposure to flooding in the future, especially after heavy rain,” he says. “We also expect this to have an impact on capacity allocation. Clients who convince us that they have suitable risk management concepts will have an advantage when buying insurance cover.”

The July flood is often compared to the Elbe flood of 2002. Is the comparison justified? “Every flood is different and unique,” clarifies Wenigmann. “The Elbe flood happened over several days and along a major river, so there was more time to prepare and better warnings. Because of this, fewer lives were lost due to the Elbe flood. Weather system Bernd, on the other hand, sadly took most residents by surprise.”

The Allianz Group is currently assuming a gross claims burden of 1.1 billion euros for the July flood damage, across Germany, Belgium and the Netherlands. This includes claims by industrial customers of AGCS. The largest share of this amount, around 700 million euros gross, has been set aside by Allianz for its insured clients in Germany. AGCS expects claims payments of more than 100 million euros for affected companies in western Germany and Benelux.

In comparison, Allianz paid out 917 million euros for the Elbe flood in 2002. If price increases are taken into account, the value today is 1.76 billion euros. “So depending on which value you use for the 2002 flood, the value then or the current value, Ilse or Bernd is the biggest event so far in the entire history of Allianz,” says Thorsten Fromhold, Head of Portfolio Management & Retrocession at Allianz Re.

The July flash flood was just one of many natural catastrophes this year. Various extreme weather events occurred around the world, be it the heavy hail over Europe in June or the heat wave in the U.S. Although efforts are underway to limit global warming, there are no immediate solutions to these natural disasters. What can help, is preparation to better deal with them and minimize loss of life and property. “Political support is needed, especially with regard to the risks of heavy rain and flooding,” says Klaus-Peter Roehler, the member of the Allianz SE Board of Management responsible for insurance in German-speaking countries and Central & Eastern Europe. “Strict building restrictions in floodplains as well as flood protection and river basin management play a central role here.”

On the role of insurers, he adds: “We want to ensure that as many people as possible are covered in the event of a loss. That's why we in Germany need to work with politicians to strongly promote insurance against natural hazards for property owners. After all, damage caused by heavy rain can happen anywhere. This calls for joint efforts by state, industry and individuals. A viable solution will have to include elements such as individual prevention, intensive flood protection, a rethink on building and spatial planning, warning and rescue systems, insurance solutions for the general population and their affordability, as well as, if necessary, deductibles for individual precautions.”

Allianz Group is accelerating the deployment of its climate strategy and has announced new ambitious commitments in both its core business and operations. The company will limit the greenhouse gas emissions (GHG) deriving from Allianz’s sites and activities in over 70 markets to net-zero by 2030, instead of 2050 as originally planned.

Fighting for a future free from plastic pollution

Plastic is a threat to our oceans and seas. All life on earth depends on these important ecosystems. Action is urgently needed by governments, the business community and consumers to reduce to harm to our planet.