The Future of Work

Social, cultural and especially technological developments are dramatically altering our notion of work. In the next few weeks, we will examine how the concept of ‘work’ is changing in the world around us – and in our company.

Alexander Metz can clearly remember the day he started working – it was the day man first walked on the moon. Aged 23 in 1969, Alexander was fresh from university with a degree in what was then the exciting new field of computer programming. He was attracted to Allianz because it enjoyed the reputation of being on the cutting edge of technology. The company had just bought a third-generation IBM/360 system with an insane memory of 256KB! Alexander couldn’t wait to work on it.

Forty years later, when he retired from Allianz, the work environment had drastically changed. Women were starting to move into managerial positions, the canteen had become a self-service instead of a sit-down three-course meal, and your name was no longer ticked off by your department head every morning. In 1969, Alexander had helped install the first ever computer screen at Allianz, but by the time he left, everyone had at least one on their desk and the latest mobile phones provided to employees were about 500,000 times more powerful than that original mainframe.

Today, when the ‘future of work’ is on everybody’s mind, it helps to look back on how workplaces have constantly been undergoing change. For example, young employees take the Internet for granted, but it was only around the year 2000 that it really got going. Before then, if you wanted to send someone a business message, it went by internal post or – if urgent – by pneumatic tube, a system of pressurized air tubes that ran throughout Allianz buildings. As for social messaging, back in the ‘60s, no personal phone calls were allowed during work hours and even chatting at the workplace was frowned upon.

Alexander Metz, a computer programmer who began his career in 1969, had much more paperwork to do than today's techies

The way we were

Around 1970, miniskirts made way for kaftans as the height of fashion, an average worker earned around $3 a week, Simon and Garfunkel sang "Bridge Over Troubled Water" and Vietnam had become the name for an epoch of change.

Employees who worked at Allianz then recall the time fondly, but marvel at how rigid conditions seem when looking back, even in a company seen as progressive. Luise Marie Stepken, who joined in 1960, recalls that the traditional “blue suit” insurance dress code was well-enforced. For women, this meant high heels, modest dresses and even hats!

The falling use of paper was one of the most dramatic changes Luise Marie observed during her time at Allianz. Even if offices are yet to turn fully paperless, the mountains of paper that had to be filed are “unimaginable today” with so much now being seamlessly stored digitally. She played a role in this by overseeing the introduction of microfiche in the 1960s, an early technological step towards digitization.

Maria Schuster, who worked as a secretary, never addressed anyone in the office with “du”, the informal word for “you” in the German language. Everyone used the formal version - “Sie”. She remembers always being in a rush. She ran from the bus stop to the office (there was no underground rail network those days) across cobblestones in high-heels most mornings to get to work on time. She then often ran back to get dinner on the table for her husband when he came home. The highlight of her day was 9:15 AM and 1:45 PM, when a bell rang and in came a familiar lady pushing a coffee trolley.

At other times it was frowned upon to stand around or get something to drink. “It was a tragedy,” she said, when the company introduced automatic coffee machines and a more liberal approach to self-service 25 years ago, “because Ria, Rosie and Charlie – the three coffee servers – no longer appeared.” Maria looked forward to the break and the conversation.

How we work now

Today’s conditions at Allianz were unimaginable two generations ago. Young workers “du” each other and often their managers, and hold positions that didn’t even exist back then – app designer, web developer, graphic designer, portfolio manager, system analyst, data warehouse engineer, to name a few. They get their coffee when they want and enjoy a more relaxed dress code and less hierarchical environment. They have more flexible working hours and access to unprecedented communication power – the Internet, smartphones, social messaging – which enables them to work and live a far more mobile lifestyle.

For women in particular, career choices are no longer limited to stenographer, secretary or receptionist – and not because these jobs no longer exist. In step with societal changes, women are now found in all positions throughout the company and are being actively promoted into leadership positions. This is a development that Luise Marie welcomes. As one of the first female managers at Allianz, she once asked for a pay raise and was told she was already the highest paid woman in the company. She argued politely that her pay should be compared to her peers – male managers - who earned much more than her.

How our workplace has changed with time 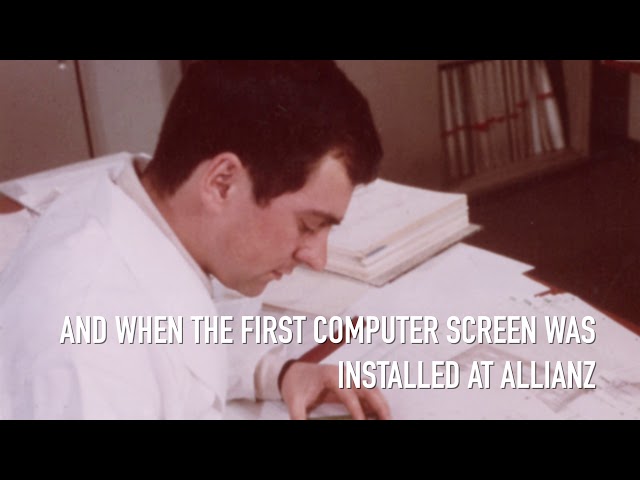 Like the young workers of the 1960s and 1970s, millennials can expect the workplace to evolve further, both positively and negatively. In a recent online discussion, millennials, including some Allianz employees, hoped for more opportunities to work remotely. Rising cost of living in cities, combined with long commutes from the suburbs, are proving onerous. Greater workplace flexibility would help them resolve the dilemma between high costs or long travel. It would also help rebalance lifestyles.

For all its miracles, modern communication is blurring the lines between work and free time, with laptops, tablets and cell phones proving to be a chain that binds employees more tightly to companies, to the point of erasing any concept of downtime.

But overall, those in employment seem generally pleased with the modern workplace environment and appreciative of the opportunities they have. They may be surprised, however, that in one regard, those former employees feel sorry for them.

As one of them puts it, “We lived and worked in a time of full employment, and we never feared being fired or displaced by machines.” Having almost guaranteed employment left them relatively free to take risks in terms of jobs and to dare to try different things.

Or at least that is how they remember it.