Founded in 2010 by chef José Andrés, World Central Kitchen (WCK) is a non-profit organization that is first to the frontlines, providing meals in response to humanitarian, climate, and community crises while working to build resilient food systems with locally led solutions. WCK has served more than 100 million fresh meals to people impacted by natural disasters and other crises around the world.

In Allianz’s ongoing efforts to support millions of Ukrainians fleeing their country in search of safety and refuge, the company continues its collaboration with NGOs. Since February, we have apportioned 7.2 million euros, out of the 10 million euros set aside, to assist those displaced by the invasion of Ukraine.

Today, the company has announced a donation of 500,000 euros to World Central Kitchen.

Food is a universal human right

The Michelin-star chef and humanitarian and his team can be found distributing meals at disaster sites.  The organization served over 3.4 million meals after Hurricane Maria devastated Puerto Rico in 2017, fed 11,400 furloughed workers in just one day in Washington, D.C. during the 2019 government shutdown, and distributed 840,000 meals to hospital workers in India during a surge of COVID-19.

“Wherever there is a fight so that hungry people may eat, we will be there”

WCK’s response to the humanitarian crisis in Ukraine has since scaled rapidly and is now focusing on four priorities:

3. Distributing food products and produce to areas under Russian attack 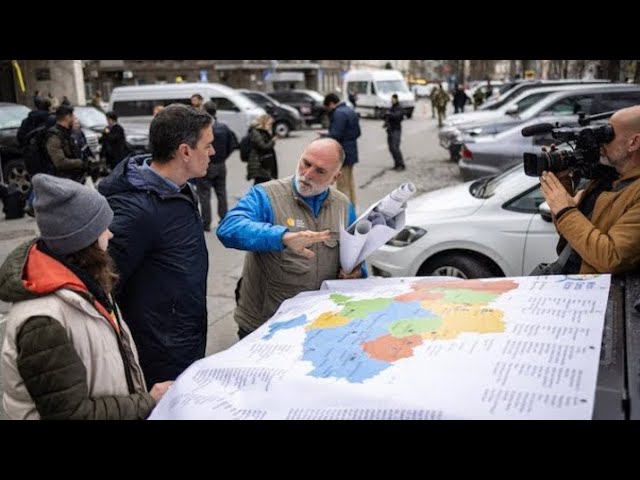 Initially, WCK focused on supporting refugees fleeing Ukraine and established itself in different countries with borders with Ukraine, including Poland, Slovakia, Hungary, Romania, and Moldova. Almost simultaneously, the organization expanded into Ukraine itself to support the millions of internally displaced persons. With the evolving nature of this crisis, what started as a mass meal distribution outside of Ukraine has now mostly shifted to meal distribution inside Ukraine, where the greatest needs are, as the country continues to fight the war.

WCK has scaled their work within Ukraine by working with hundreds of restaurants, food trucks, and caterers, distributing meals to over 650 cities and towns. In addition to hot meals and sandwiches, WCK is providing food kits for families who can prepare meals at home. In addition to food, community is at the core of WCK’s operations; working closely with Ukrainians helps them navigate within the country and with information-sharing.

WCK continues to support refugees arriving in key destination countries, such as Spain and Germany. In Spain, they are cooking out of their relief kitchen and partnering with a local restaurant to serve meals to a social security office, shelters, and churches housing refugees. In Germany, the organization is serving hundreds of daily meals at SafeSpace, a refuge for Ukrainians arriving in Leipzig.

With local businesses still shuttered, WCK is distributing meals and food kits to towns in the Kyiv region and other liberated areas, giving communities the ability to prepare meals in their homes. WCK meal kits weigh 30 pounds and contain enough food for a family for four days.

Chef José and his team were among the first people to enter the towns of Bucha and Irpin following the retreat of the Russian army. A video of what they saw can be seen here.

WCK continues distributing food products via truck, train, and boat to support communities that are under bombardment, particularly those adjacent to Donbas region. The organization is filling strategically located warehouses in cities including Kharkiv, Dnipro ( this video shows the WCK team hard at work to get everything ready), and Zaporizhzhia, and working with local community members to transport the food to areas that are on the frontlines of the conflict.

Ukraine is one of the biggest producers of wheat, corn, and sunflower oil. To support Ukraine’s agriculture sector, WCK is working with the Ministry of Agriculture to identify farms in need of seed purchasing support and buying seeds from a local Ukrainian supplier.

WCK aims to get seeds into the hands of farmers and planted ahead of season in order to support farmers’ livelihoods, crop output, and strengthen the local food ecosystem.

To date, WCK has worked in the region over four months in response to the humanitarian crisis in and around Ukraine. In addition to distributing nourishing food each day and piloting new initiatives, WCK teams are prepared to continue adapting as the conflict and humanitarian needs inevitably shift.

In various European countries, Allianz is offering free insurance coverage to Ukrainian refugees and their helpers, including those who provide private accommodation. Below is an overview of the offerings that are available in Austria, Czech Republic, Germany, Hungary, Poland, Slovakia and UK. Our aim is quick information and unbureaucratic assistance.

Allianz to provide up to 12.5 million Euros of humanitarian assistance

Today Allianz SE announced that it would make available 10 million euros to support humanitarian efforts in light of the invasion of Ukraine along with up to 2.5 million euros to match employee donations.