Promoting the world’s healthiest diet can improve the health of an economy and a society too. Wise Greece, winner of the Allianz Future Generations Award 2019, shows us how. In a tough competition, Wise Greece beat out seven other social startups this year to win a 40,000-euro grant from Allianz.

Google ‘world’s healthiest diet’ and the word ‘Mediterranean’ pops up more than any other. The Mediterranean diet is synonymous with good health and a long life. In fact, the Greek island of Ikaria has made headlines for being one of the places with the highest longevity in the world – one-third of the population lives beyond the age of 90 years.

Given this image, it’s hard to believe that Greece - the Mediterranean country known to produce some of the healthiest foods - grapples with malnutrition. Harsh as it may be, that’s the reality; high youth unemployment puts many at risk of being underfed.

The irony was not lost on Melina Taprantzi.

But instead of ignoring the social malaise, she decided to do something about it. She founded a business that supports small farm producers in Greece, at the same time feeding the underprivileged and skilling Greek youngsters.

Wise Greece, winner of the Allianz Future Generations Award 2019, promotes top-quality Greek products locally and internationally, using its profits to meet the nutritional needs of those in need. In addition, its Wise Greece Academy teaches young Greeks the ins and outs of the farming industry, empowering them to build a better future. “They improve their job prospects and the country’s farming industry thrives,” says 35-year-old Melina.

In a tough competition, Wise Greece beat out seven other social startups this year to win a 40,000-euro grant from Allianz. The grant will go a long way in granting some basic wishes. “We will use it to create an online platform to provide courses to children even in the remotest parts of the country, set up an innovation center and maybe even launch a food innovation contest,” adds the social entrepreneur. “Our aim is to reach 4,500 young people next year.”

Melina graduated in philosophy but worked in marketing and communications for over a decade before she decided to use her skills for society. Social entrepreneurship was the answer.

She founded Wise Greece in 2013. Since then, the startup has given over 100 small producers a platform to market more than 2,500 products in eight countries. Profits earned have been used to buy over 30 tons of food and donate to soup kitchens, children, families and the elderly. More than 2,000 children have benefitted so far.

Business is good. Sales are growing at an annual clip of 40 percent.

Although farming is one of the mainstays of the Greek economy, Melina and her crew were horrified to find in a survey that awareness of the industry and career interest in it was disturbingly low among youngsters. As many of 75 percent of the children surveyed did not have any interest in agriculture, Greece’s second largest industry.

“As many 80 percent of the youngsters who have participated in our workshops now want to work in the agri-food sector. Moreover, 50 percent came up with some really innovative ideas to combine technology with agriculture,” Melina says.

The uniqueness of Wise Greece’s work has not gone unnoticed.

Besides the Allianz Future Generations Award, the startup has won the European Social Challenge Award 2018 and been recognized as a ‘Model of Excellence’ by the President of the Greek Republic, among other honors.

At the pitching ceremony for the Allianz award, Melina left the judges impressed not only with her creative idea but also with her energy and enthusiasm.

Nadja Malak, the Head of Corporate Partnerships at SOS Children’s Villages Worldwide and a member of the judging panel, said: “Wise Greece has a sound business model. The team addresses a huge socioeconomic problem in Greece. Youth unemployment is as high as 45 percent in rural areas. The solution is fascinatingly simple but it works!” 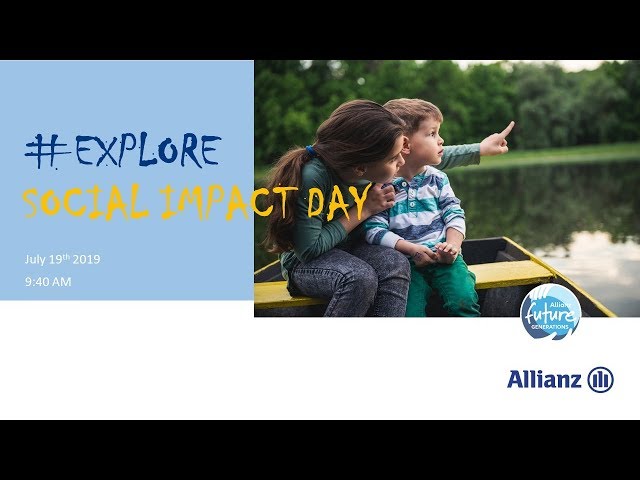 So the next time you need olives for that summer party or a delicious jam to gift a colleague, look no further than Wise Greece. “You buy a top-quality Greek product from us and you know that with your money, somebody else also gets a healthy dinner tonight,” Melina finishes.

Congratulations to the winner and good luck!

Allianz is launching the MoveNow program to support and strengthen young people by facilitating access and offering opportunities to become and stay active. The mission is to prepare the next generation for the future by moving their body, mind and soul.